I absolutely love making socks. As a project, they’re relatively quick, by now very familiar, a small canvas for a bit of experimentation, and in the end, always useful. After all, who doesn’t need another pair of socks?

Unfortunately, that’s also caused me to amass quite the collection of sock yarn over the years. In fact, I spent a good part of 2019 making sock after sock after sock thanks to our indulging in a Michael’s Boxing Day sale back at the start of last year.

But, I’ll be the first to admit, the stash has been building up for a long time, now.

As a result, the yarn that I used in this project–a lovely, variegated yellow yarn who’s label I’ve apparently lost–has been sitting in my collection for a couple of years now, having been pushed down the queue by more recent acquisitions. However, I finally decided to do something with it! 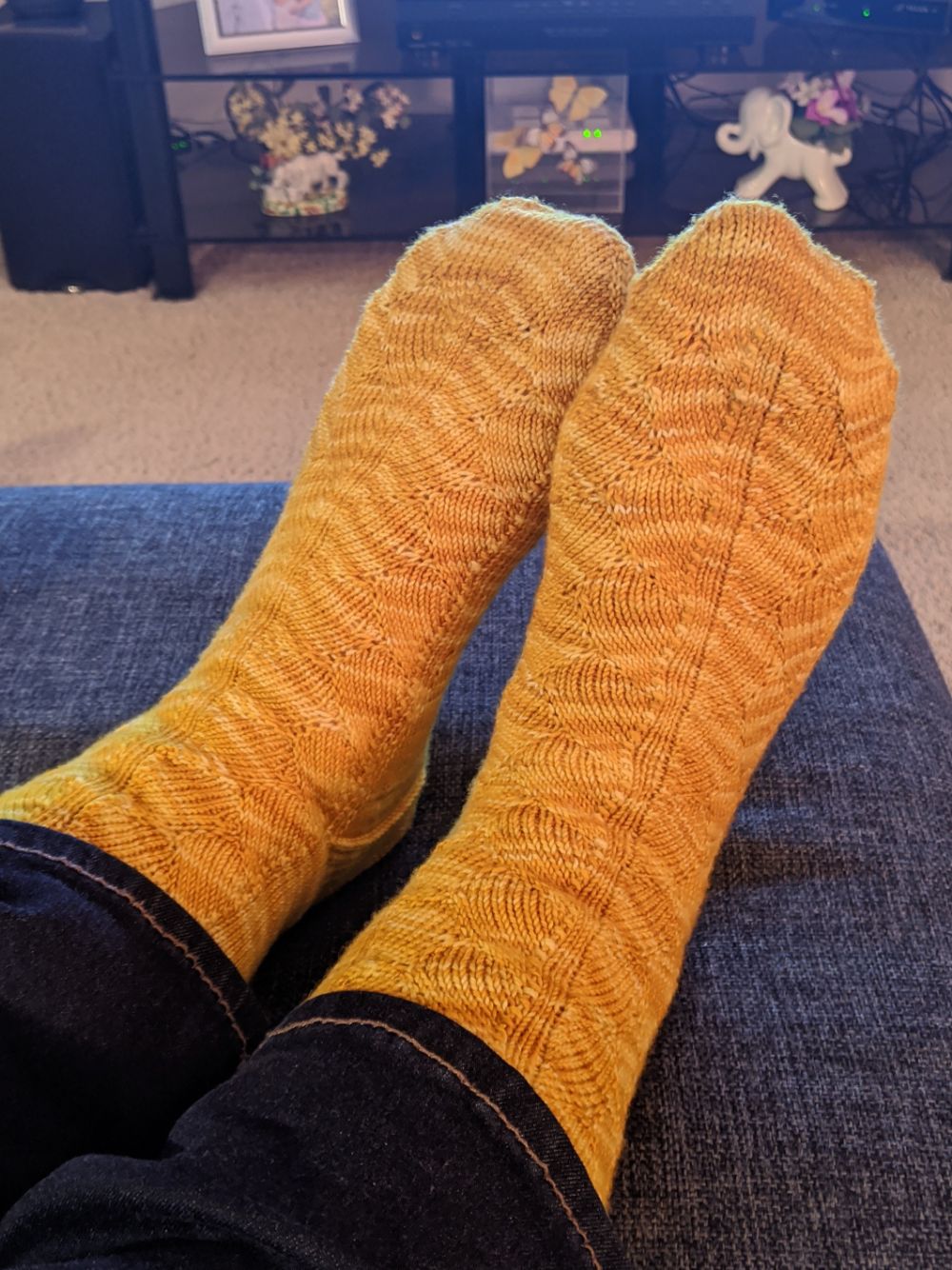 Now, as a toe-up sock knitter, it’s always a bit trickier to find patterns, and so I’ve often settled for coming up with my own designs1. However, this time, I decided to try my hand at converting an existing cuff-down pattern to toe-up.

These socks are based off of the My Cup of Tea Socks2 pattern (hosted on Ravelry), which I then altered, both to convert the pattern to toe-up, and to make the motif a bit larger.

Throughout this post I use a knitting chart symbol font from StitchMastery called StitchMasteryDash. If your browser doesn’t support native TrueType fonts, well, now you have a good reason to upgrade!

Below is a quick legend for the symbols:

Note, in this pattern, the m2 I use is a double lifted increase that doesn’t appear in any stitch dictionary I have at hand (though I’m sure it’s an unvention, so if someone knows the name of this thing, I’d love to hear it!) Of course, if you can find a better option, please, substitute as you see fit!

Specifically, I used the following stitch: Start with a normal lifted m1r, but after completing the first stitch, instead of slipping the left stitch off the needle, knit into the back loop first (put another way, it’s like increasing by knitting in to the front and back of the next stitch, except instead of knitting into the next stitch you knit into the lifted bar). The result is a slightly bulky double increase with no visible hole.

The tricky part of converting this sock from cuff-down to toe-up is the pattern motif. This chart shows the normal cuff-down design (I’ve removed the knit rounds so this is only the motif stitches):

Looking at this chart, you can see the visual effect is created through a mix of increases on the borders of the motif and decreases in the middle, resulting in a scalloped design.

Reversing this design for a toe-up knitter like myself is a pretty natural process:

Which gets you this result:

Enlarging the motif for size

As I mentioned in the introduction, I also wanted the motif to be a bit wider, to take up the full width of the top of the foot. Fortunately, the motif lends itself well to naturally expanding it both in width and height. Where the original was 6 rows (12 counting the interstitial knit rounds) over 24 stitches, the new version is 8 rows over 32 stitches:

The one tricky bit of note, here, is on row five. It wasn’t until I ran through the motif in a test swatch that I realized I needed a decrease before the m2 in order to keep the stitch counts correct, as unlike in row one, due to the expanded layout, the m2 is preceded by a m1r (which is a combination you don’t see in the original motif).

In hindsight, I probably could’ve just simplified that part to a KFB. But this works!

The rest of the sock

With the motif in hand, the sock itself otherwise followed my usual template (this is on 2.75mm DPNs):

And if you don’t know what most of that means, you should definitely learn you a toe-up sock!5

https://robertheaton.com/2020/02/05/wacom-drawing-tablets-track-name-of-every-application-you-open/
Another pair down! This yarn...