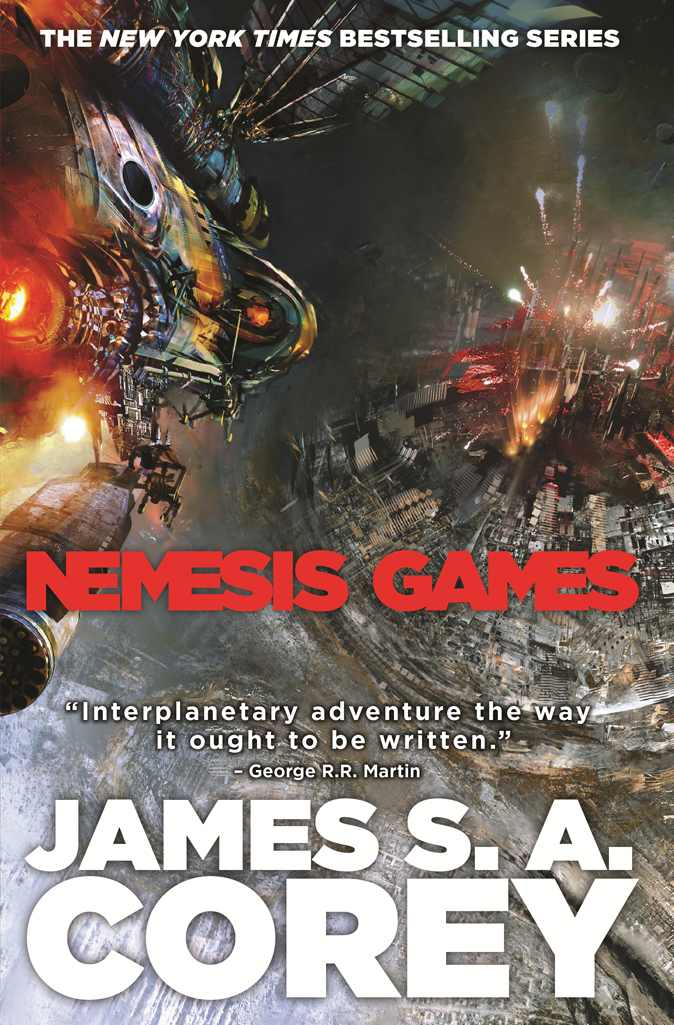 A thousand worlds have opened, and the greatest land rush in human history has begun. As wave after wave of colonists leave, the power structures of the old solar system begin to buckle.

Ships are disappearing without a trace. Private armies are being secretly formed. The sole remaining protomolecule sample is stolen. Terrorist attacks previously considered impossible bring the inner planets to their knees. The sins of the past are returning to exact a terrible price.

And as a new human order is struggling to be born in blood and fire, James Holden and the crew of the Rocinante must struggle to survive and get back to the only home they have left.

To say this book was better than Cibola Burn would be an enormous understatement… in fact, it was a close call as to whether I would bother continuing the series after book four, but I decided to take a crack at it, and I’m very glad I did!

Nemesis Games differs from all previous books in the series in the way it deals with the crew. By book four we had our crew humming along, everything seemingly comfortable and settled. Of course, comfortable and settled doesn’t make for a very exciting plot, so in Nemesis Games, Corey splits the crew apart… to be honest, the individual pretexts feel a bit contrived, but it provides an opportunity to explore each of the individual characters, allowing them to grow and change outside the context of the Rocinante and her crew. This gives Corey a change to unsettled things again and create new opportunities for tension and character development, which ends up working quite well.

Cibola Burn differs from its predecessors by also focusing on the action on a single planet, largely divorced from the wider human context of Earth, Mars, the Belt, and the rings. Unfortunately, the result is a book that felt smaller, less driving. Nemesis Games is an absolute return to form in this regard, giving us a solar system-wide conspiracy to unravel, the results of which utterly transform the series, setting the stage for subsequent books.

In short, where Cibola Burn stumbled, Nemesis Games gets the series right back on track.