Well, I took the plunge over the weekend and dropped some hefty dollars to get me a copy of The Bread Baker’s Apprentice, by Peter Reinhart. It is, without a doubt, a fantastic book covering the art and science of bread making, providing excellent pictures, illustrations, and formulae for creating great breads of many different styles, from sandwich to artisnal, yeasted to sourdough.

Of course, with a resource like that at my fingertips, it would be silly of me not to make some bread (despite the fact that I made a pair of sandwich loaves over the weekend (25/65/10 white/WW/rye… yummy!)). So, in anticipation of making some lasagna tonight, I decided to try and execute the Italian bread recipe in the book. The results speak for themselves: 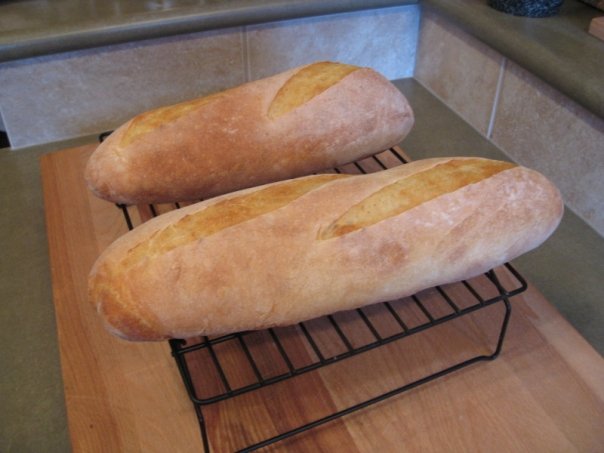 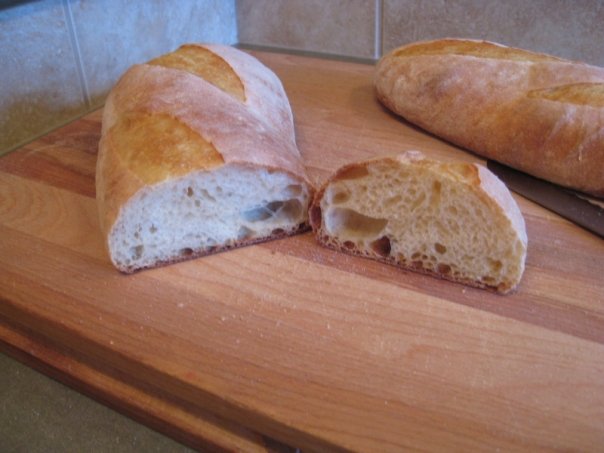 Pretty nice, if I do say so myself! Nice colour, decent oven spring (though not great… the bread formed a bit of a skin during proofing which may have limited spring), reasonable scoring (though not on a proper angle, so no “ears”), and the crumb is just what I was looking for: big, irregular holes, with a nice, soft interior. And flavour-wise it’s deliciously complex, without a hint of yeast. My only complaint is that it’s rather salty, though I think that’s a consequence of the recipe rather than botched execution (the formula has salt at 3.6% by weight… by contrast, French bread has just 1.9% salt).

Up next? Sourdough… eventually. The starter is percolating, and smells distinctly like yogurt, which would be the lactobacillus churning away and lowering the ph. Hopefully today or tomorrow it’ll start smelling more like yeast.