The middle volume of the first Mistborn trilogy brings more twists and inversions of classic fantasy tropes that offset a somewhat slow middle to bring a satisfying end to this second book. 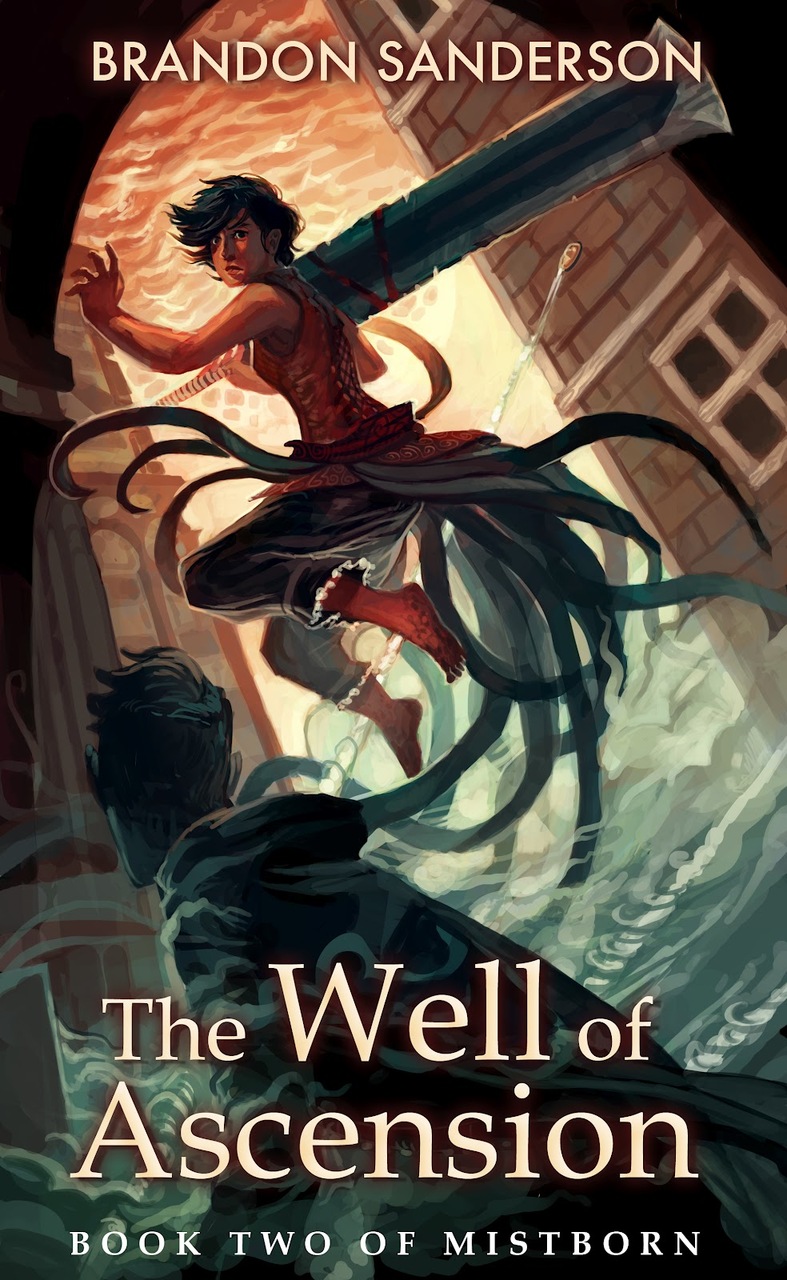 The impossible has been accomplished. The Lord Ruler -- the man who claimed to be god incarnate and brutally ruled the world for a thousand years -- has been vanquished. But Kelsier, the hero who masterminded that triumph, is dead too, and now the awesome task of building a new world has been left to his young protégé, Vin, the former street urchin who is now the most powerful Mistborn in the land, and to the idealistic young nobleman she loves.

As Kelsier's protégé and slayer of the Lord Ruler she is now venerated by a budding new religion, a distinction that makes her intensely uncomfortable. Even more worrying, the mists have begun behaving strangely since the Lord Ruler died, and seem to harbor a strange vaporous entity that haunts her.

Stopping assassins may keep Vin's Mistborn skills sharp, but it's the least of her problems. Luthadel, the largest city of the former empire, doesn't run itself, and Vin and the other members of Kelsier's crew, who lead the revolution, must learn a whole new set of practical and political skills to help. It certainly won't get easier with three armies – one of them composed of ferocious giants – now vying to conquer the city, and no sign of the Lord Ruler's hidden cache of atium, the rarest and most powerful allomantic metal.

As the siege of Luthadel tightens, an ancient legend seems to offer a glimmer of hope. But even if it really exists, no one knows where to find the Well of Ascension or what manner of power it bestows.

I’ve fallen woefully behind in writing reviews of books as I’ve been reading them but I’m going to try to catch up based on contemporaneous notes I took shortly after finishing each book. That does mean this’ll probably feel a bit disconnected. You have been warned! And by you, I mean myself some time from now, given I’m likely to be the only person reading this…

This second novel of the first Mistborn trilogy was not without its flaws. While I absolutely loved the evolution of many of our characters, not to mention the world itself, and the trope inversions toward the end were fantastic, the book definitely felt a bit slow through the middle bit (a trait further exacerbated later in The Hero of Ages). That being said, I had little trouble powering through this volume. It’s still a Sanderson book, and as always, the avalanche at the end was breathtaking!

Let’s start with those characters.

First, a brief detour to talk about Breeze, who rapidly became one of my favourite characters in the series. He truly is a pleasant surprise as readers discover that there’s a great deal more beneath the aloof, careless facade that he puts up. I especially loved that in the end he was himself manipulated by emotional Allomancy. From an author who enjoys reversals, this was a great one!

Next we have the journey of Sazed and Tindwyl. Again, this was a wonderful evolution for Sazed’s character, and I enjoyed the delicate touch that Mr. Sanderson used while allowing their relationship to develop. And speaking of Tindwyl, she was an absolutely fascinating character, a wonderful foil to Sazed, and a fantastic plot device for helping justify Elend’s necessary evolution throughout this second book.

That being said, I did find Elend’s final transformation to occur a bit suddenly toward the end. That’s not to say his character arc was unbelievable, just that it felt a tad rushed through its conclusion. Of course, in a book with a bit of a slow middle, having that evolution occur a bit more gradually may have only hurt the narrative, so in the end I probably can’t complain to much.

Vin, by contrast, was a bit harder to take in this book. Her continuous self-doubt was understandable, but the constant paranoia, the assumptions she made, and her overall struggle felt a bit… forced? That being said, again, Vin’s background to some extent naturally informed some of her behaviours, so maybe the real issue is I simply didn’t like her that much in this book until she finally started to make some decisions and pull herself together.

Unfortunately, that did mean that the tension between Vin and Elend felt rather artificial to me. I don’t have a ton of patience for character tension built on their withholding information from one another, making assumptions, and just generally not communicating. That’s not to say that isn’t normal in any human relationship, but in this book it felt forced.

Moving on to the villains of the piece, we have Straff and Zane.

To Mr. Sanderson’s credit, Zane is, at least in my opinion, a fantastically interesting villain (who, as we’ll discover in hindsight in the third book, had good reasons for behaving the way he did). I quite enjoyed the dynamic between Vin and Zane, though I’m not sure I bought into the idea that Vin might actually be interested in the man, beyond their connection as Mistborn. But where Elend had Tindwyl, Vin had Zane, and in both cases I think it’s fascinating how Mr. Sanderson used these character relationships to help drive changes in our heros.

Straff, but contrast, felt like a straight up stereotype. If Mr. Sanderson had depicted him twirling his mustache, I would’ve been entirely unsurprised. And while I certainly enjoyed his getting his comeuppance at the end, I just didn’t find him compelling enough to care too much.

Stepping back and looking at the world at large, I think one of the things I really enjoyed about the book is that it took an honest look at what would happen in the power vacuum following the death of the Lord Ruler. After all, killing the Sliver of Infinity is a pretty big deal!

I also quite enjoyed how Sanderson looked at the classic fantasy trope of the prophesied hero and flipped it on its head. I had completely forgotten about the twists revealed in this second book, and man, were they ever satisfying!

Alright, so that’s it, a meandering snapshot of a bunch of disconnected thoughts. And now on to The Hero of Ages!

Review: The Hero of Ages
https://www.cbc.ca/news/canada/calgary/alberta-parks-delisting-campground-usage-data-1.5819906