This book convinced me that Mr. Sanderson is basically the opposite of Stephen King or Neal Stephenson: the middle bits of his books can be a bit slow, but when the man writes an ending, holy heck he writes an ending! 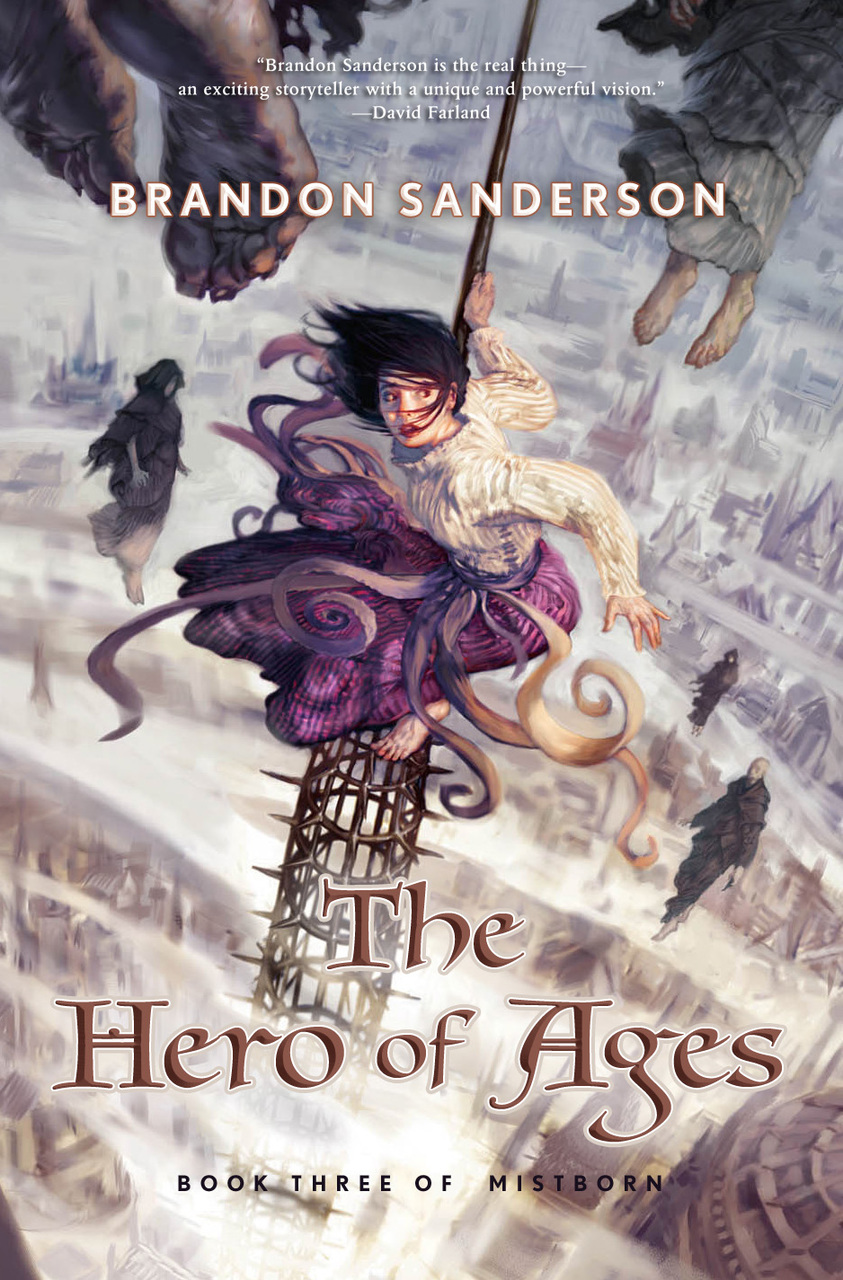 Who is the Hero of Ages?

To end the Final Empire and restore freedom, Vin killed the Lord Ruler. But as a result, the Deepness--the lethal form of the ubiquitous mists--is back, along with increasingly heavy ashfalls and ever more powerful earthquakes. Humanity appears to be doomed.

Having escaped death at the climax of The Well of Ascension only by becoming a Mistborn himself, Emperor Elend Venture hopes to find clues left behind by the Lord Ruler that will allow him to save the world. Vin is consumed with guilt at having been tricked into releasing the mystic force known as Ruin from the Well. Ruin wants to end the world, and its near omniscience and ability to warp reality make stopping it seem impossible. She can't even discuss it with Elend lest Ruin learn their plans!

The third book in the first Mistborn trilogy is such a dilemma for me. On the one hand by god it was slow. While Mr. Sanderson tried to create a narrative drive via Spook’s journey and so forth, the siege of Fadrex felt like it went on far far too long.

On the flipside, the reveals in this book–the nature of hemalurgy, the backdrop of Ruin and Preservation, the history of the Kandra–were absolutely riveting! And man, that ending.

But does it all make up for the plodding middle? I’m not sure. As far as individual volumes go, I think this one is the most flawed. But as a series, I remember why I loved it so much!

Looking at the individual character arcs a bit, overall this is probably the one I’m least enamoured with.

Starting with Sazed, while his struggles felt very real and very relatable, bluntly, it felt far too repetitive. There’s only so many times we had to hear him reading about those religions he carries around before, as a reader, you can’t help but think “Yes, we get it, he won’t find any faith there.” I also didn’t really buy into his reversal at the end. Yes, his conversations with the Kandra gave him an alternative perspective–that faith can’t be found in logic and reason–but I just didn’t buy how quickly he ultimately turned a corner.

That being said, I do find it fascinating that Sanderson found himself writing about a character experiencing a crisis of faith. As a religious man himself, I can’t help but wonder if there is some personal truth overlaid on Sazed’s path through this book.

Vin and Elend, by contrast, really came into their own in this book, and much of it felt like a bit of a victory lap.

And I was totally fine with that!

Is it a bit convenient that Elend became Mistborn? Yes. Is his character in this third book the polar opposite of his character in the first? Yup! Did I still deeply enjoy their arrival at the ball in Fadrex, showing finally that they truly are the Emperor and Empress of the world they’ve created? Absolutely!

Spook’s journey, by contrast, was far less compelling for me. Mr. Sanderson makes an admirable attempt to use Spook’s backstory to drive a narrative rooted in his self-doubt and insecurities, but I dunno, I just didn’t connect with it, which is unfortunate given how much time is spent on it.

Stepping back and looking more broadly, I do find it fascinating that in both this book and in The Stormlight Archives, Sanderson unleashes supernatural forces on a world and then, through a very scientific lens, tries to explore the consequences. In a sense this is an extension of his approach to magic systems, except extrapolated to world building. In particular, here we see him explore the consequences of the changes the Lord Ruler introduced when he held the power at the Well of Ascension. The writing around this topic felt nearly like science fiction to me. It’s quite a fascinating approach to the fantasy genre.

And then there’s that damn ending. The logic of the resolution of the conflict between Ruin and Preservation was absolutely perfect. As to the question of who the Hero of Ages was, the answer really did feel like the perfect fit. I just cannot express how satisfied I was with the way this first trilogy came to its conclusion.

Alright, that’s it, that’s all I’ve got! Now on to the Allow of Law…