A standalone novel by Brandon Sanderson, Warbreaker is fascinating for it’s reversal of many tropes, but really shines due to the commentary provided along the way. 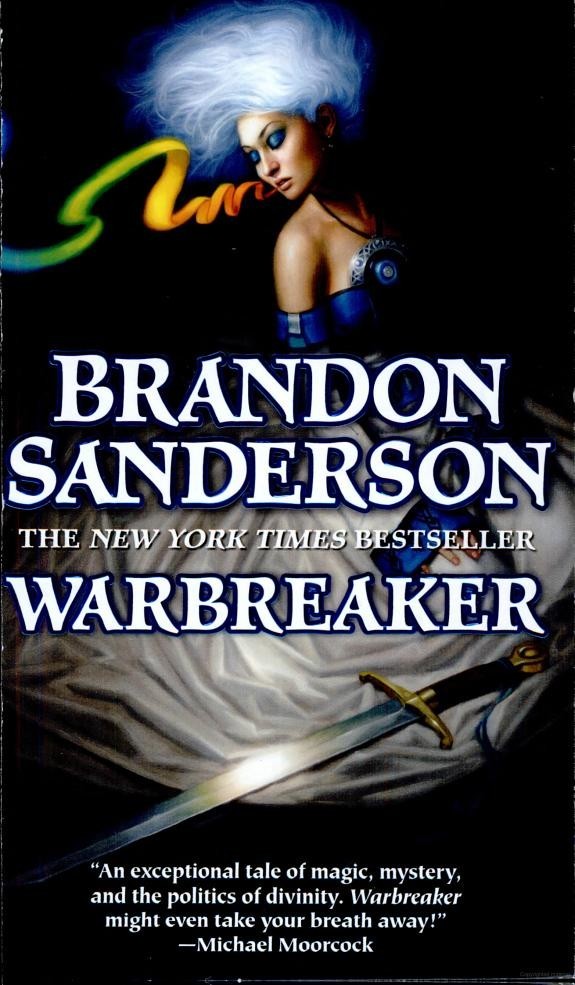 Warbreaker is the story of two sisters, who happen to be princesses, the God King one of them has to marry, the lesser god who doesn't like his job, and the immortal who's still trying to undo the mistakes he made hundreds of years ago. Their world is one in which those who die in glory return as gods to live confined to a pantheon in Hallandren's capital city and where a power known as BioChromatic magic is based on an essence known as breath that can only be collected one unit at a time from individual people.

By using breath and drawing upon the color in everyday objects, all manner of miracles and mischief can be accomplished. It will take considerable quantities of each to resolve all the challenges facing Vivenna and Siri, princesses of Idris; Susebron the God King; Lightsong, reluctant god of bravery, and mysterious Vasher, the Warbreaker.

So the entire month of September was a bit of a weird one for me, and so I completely forgot that I hadn’t posted a review for Warbreaker. As a result, this post is both going to be a) a bit of a retrospective after the memories of the book have faded a bit, and b) probably a bit short. But since no one is reading any of this, anyway, well, what do you care??

Alright, so Warbreaker itself is a standalone novel set in the Cosmere. As a result, by the end of the book you’ll come to realize that two of the main characters from the series make an appearance in The Stormlight Archives, and in particular Oathbringer. For fans of The Stormlight Archives, I’d definitely call this a strongly recommended read, and if you can, read it before you read Oathbringer. I kinda wish I did.

Anyway, the authoring of this book was done in a rather unique way (or, maybe not so unique if you’re familiar with the idea of serials from the earlier days of the publishing industry), in that the book was published as a set of instalments on Sanderson’s website. But what really makes it interesting is that, as part of publishing those instalments, Sanderson also wrote up commentary to go with each chapter in which he digs into his intent when writing the book.

One of the big themes that he touches on is one of reversals. Those reversals both take the form of character reversals, as well as general trope reversals. As an example, probably the biggest trope reversal in this book is the idea that the characters are trying to stop a war, instead of trying to win one as is typical for the genre.

Consequently, I feel like I enjoyed this book a lot more than I might have otherwise, as Sanderson’s commentary gave me a real insight into what he was trying to achieve. I really wish more authors did this kind of thing! It really added something!

Beyond that, the book is jam packed with reversals all over the place. I can’t say much more without spoiling things, but it suffices to say that many of the surprising turns are specifically a result of reversals that play on reader expectations built on tropes in the genre. As a result, the book felt fresh and interesting.

In the end I think this might be one of my favourite Sanderson books yet. As a standalone book it felt tight and the ending (though stumbling into a bit of deus ex machina) very satisfying. I enjoyed it so much that I went on to read Sanderson’s first novel, the standalone “Elantris”.