Book three of The Stormlight Archives, Oathbringer centers around the journey of Dalinar, whose journey feels the most complex and relatable yet. 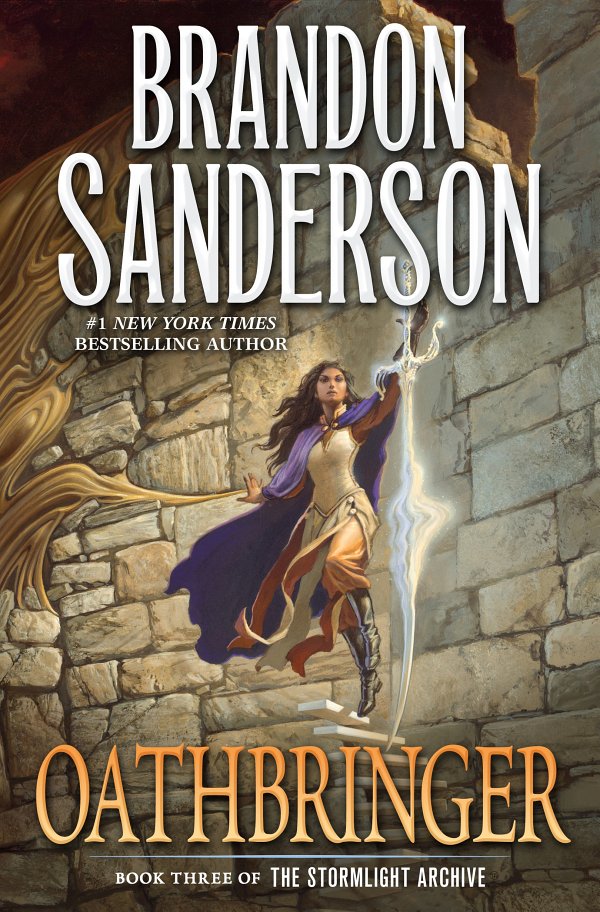 In Oathbringer, the third volume of the New York Times bestselling Stormlight Archive, humanity faces a new Desolation with the return of the Voidbringers, a foe with numbers as great as their thirst for vengeance.

Dalinar Kholin’s Alethi armies won a fleeting victory at a terrible cost: The enemy Parshendi summoned the violent Everstorm, which now sweeps the world with destruction, and in its passing awakens the once peaceful and subservient parshmen to the horror of their millennia-long enslavement by humans. While on a desperate flight to warn his family of the threat, Kaladin Stormblessed must come to grips with the fact that the newly kindled anger of the parshmen may be wholly justified.

Nestled in the mountains high above the storms, in the tower city of Urithiru, Shallan Davar investigates the wonders of the ancient stronghold of the Knights Radiant and unearths dark secrets lurking in its depths. And Dalinar realizes that his holy mission to unite his homeland of Alethkar was too narrow in scope. Unless all the nations of Roshar can put aside Dalinar’s blood-soaked past and stand together―and unless Dalinar himself can confront that past―even the restoration of the Knights Radiant will not prevent the end of civilization.

The books of The Stormlight Archive are certainly not short. In fact, because I’ve been reading them on my Kindle, I only just now realized that The Way of Kings and Words of Radiance are both over a thousand pages. But it was certainly evident that Oathbringer was longer than both, and at over one thousand, two hundred pages, I was definitely right.

But I have to admit, despite their sheer volume, every book in this series has felt well paced, moving along briskly between multiple plotlines, each of which carries a momentum that’s kept me interested. And in that regard, Oathbringer is no different. It’s length was only evident in that just so very much seems to happen in this book.

Having read the third volume in this series, I now see that each book focuses on a specific character journey. In the first book we see Kaladin go from lowly slave to bridgeman to leader to eventually becoming Radiant. In the second book we see Shallan follow her own path to bonding her spren and becoming a hero in her own right. In each case we are presented with a flawed character and a narrative in the present that shows their struggling to find their way to becoming something greater, along with flashbacks to their past meant to help us understand the traumas that have lead them to be who they are.

I’ll be blunt: in both cases, I found the stories… unconvincing. That, combined with the fact that I find both characters a little flat and uninteresting, meant that the character-driven aspects of these books left me feeling a little cold. Fortunately, the world of Roshar and the broader story arc kept me going.

Oathbringer, on the other hand, is something else entirely.

Dalinar’s backstory is, at least in this reader’s opinion, handled masterfully. In previous books we find out that, sometime in the past, for reasons neither he nor the reader understand, the fact of his wife’s existence was simply taken from him. In Oathbringer, this mystery is finally revealed.

But the brilliance is in how the reason for his memory loss is then used as a clever plot device. For reasons we eventually discover, Dalinar’s memories don’t return all at once. Rather, they are slowly revealed to him. And as Dalinar re-lives these events, the reader joins him. Structurally, this is similar to the previous books, interweaving present events with flashbacks. But in Oathbringer, Dalinar learns of these events at the same time we do, and we then watch him coming to terms with the past self he’s rediscovering. The result is that Dalinar and the reader end up on this journey together.

Ultimately, his path in the book is both tragic and redemptive, with his eventual salvation forming a dramatic and moving climax to the novel, something that I never felt the Kaladin or Shallan storylines managed to achieve.

Of course, there’s quite a bit more that happens in this book, and as the plot unfolds we learn a great deal about Roshar and its history, including a truly massive reveal that… well… I totally guessed (way back in The Way of Kings, no less).

We’re also introduced to a host of new characters and hints at deeper mysteries that have already lead me to seeking out ancillary novels (I was originally going to move on to Masters of Doom, but now I feel the need to take a detour through Warbreaker so I can find out what the deal is with Zahel…).

The upshot is that I feel Oathbringer is the best of the series so far, which is an impressive feat. Unfortunately, I now get to wait impatiently until November for the next book to show up…

Nothing better than a summer...
Finished reading Oathbringer