My road cycling experience is what most would call fairly extensive. In my last summer before university, I found myself cycle commuting to work, a fairly long ride from a condo in the Dickensfield area to a school around 127th and the Yellowhead, where I worked as a teachers assisted for continuing education. On one particularly memorable day, I arrived completely drenched, from head to toe, having ridden through one of the most heavy, yet steady downpours I’ve ever experienced. And I did so riding on major roadways, such as 97th street. Ever since, I’ve taken to cycling as much as I can (save for days when I’m feeling particularly lazy… like today :), and even cycled through the winter during one memorable university year.

During this time, I’ve had a chance to observe all sorts of driver behaviour. For the most part, they ignore you. Some, when passing, perform complete lane changes to get around you. Others will speed past, the hair on the backs of my arms left prickling from the sensation of a near miss with a side mirror. I’ve had people patiently wait behind me during road chokepoints. Others have yelled and screamed. I even had one guy yell at me to “get the f— off the road”… he was driving in the opposite direction on the other side of the road. Go figure.

But, oddly, one of the things which annoys me most is the overly courteous driver. These folks are, like most drivers, confused about the role of cyclists on the road. To clarify, cyclists are vehicles. They should be treated as such. They are not pedestrians. So, with that said, consider the following: 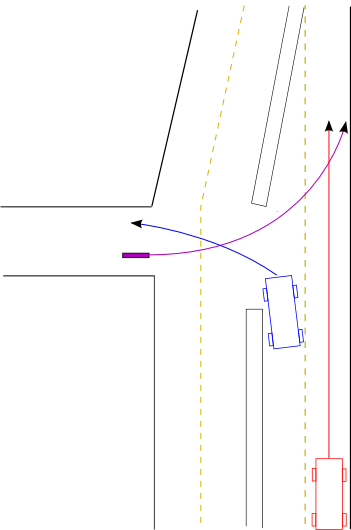 This is a rough depiction of an intersection I have to navigate on my way home. I’m the little purple guy. Now, if I were a regular road vehicle, things would proceed as follows: I would yield, waiting for the blue car to turn and the red car to pass. I would then cross traffic and enter the far lane (well, technically, I would have to enter the near lane and switch, but… details details). But often, the blue car decides to be overly nice and wait for me to cross the street. But now I, as a cyclist, am left in a bind. If I do cross the street, there’s a chance the red car won’t see me, and I’ll get run over. If I don’t, the blue car sits waiting like a jackass. Typically, the way I deal with this is to wave the blue car through, which leads to all sorts of confusion.

Now, this is just a variation on a theme. Any time I find myself approaching a stop-sign-controlled intersection, particularly if there’s a major roadway, and an intersecting street with a pair of stop signs, this sort of thing can happen. So, for the love of god, drivers, don’t be nice! The cyclist knows what they’re doing! They are a vehicle, treat them as such, and let them decide what they want to do. Because, by being nice, you are, in effect, making the cyclist’s decision for them, but in the absence of key information (like, say, the presence of the red car in the diagram above).