That’s right… things have started arriving! In particular, most of my NCIX-ordered items arrived, which allowed me to build my MythTV Backend and begin the software installation process. I’ve now got Fedora Core 5 installed and a bunch of services configured (though, without the Living Room Frontend ready, I can only get so much done).

Speaking of the frontend, the case has arrived! So, of course, I had to take a picture: 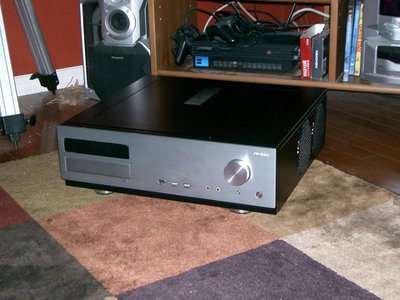 It’s bigger than I’d imagined, for some reason… about the size of a stereo receiver, and weighing in at a whopping 17lbs! Of course, this is, in part, because of the steel used in most of it’s construction. But, I gotta say… it’s pretty awesome. :) And it’ll fit perfectly in the TV stand.

Anyway, the EPIA board will likely arrive tomorrow (they apparently tried to deliver today, but I owe them money, presumably duty), and that only leaves the remaining NCIX items (which got shipped today) and the IR blaster/receiver, which are in the mail as I type this. At which point the fun will really begin!