Tonight I decided to get my Red Green on and hack together a really crappy camera mount for my telescope! It’s made from various pieces of vacuum tubing (which happens to be 2” in diameter, the same diameter of the eyepiece holder on my scope), some hardboard, and much tape (unfortunately not the duct variety… yes, I am ashamed. I had to settle for electrical). The end result was this thing: 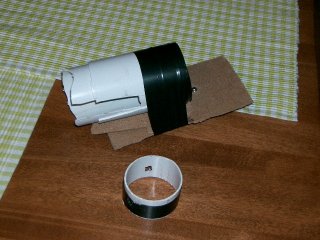 Yes, it’s as hackish as it looks. The idea is that it sorta fits over the eyepiece holder and has a separate sliding component which allows the mount to adjust for the camera lens position, differing eyepiece lengths, etc.

So, with it, I decided to take another crack at lunar photography. I captured the following image with my wide-field 25mm eyepiece (for about 60x magnification) (in this image, north is to the left):

I’ve sharpened the image to adjust for some atmospheric turbulence and poor focusing on my part. In addition, there appears to be some blurring toward the left edge of the image which is probably a result of the camera not being evenly positioned against the eyepiece.

After staring at a Lunar Map for quite a while, I managed to identify some of the more interesting features. Among them, toward the right edge of the image you can see the famous crater Tycho (it appears smaller than some of the others, but has a prominent central protrusion). This particular crater is the epicenter of a set of lunar rays which, while not incredibly prominent in this image, are visible.