You might be asking yourself, “why the heck does this guy have a page about rabbits?”.

Well, as it happens, my wife and I once had two pet rabbits, by the names of Herbie and Chloe. They’ve since passed on, but in their memory I keep this page around. They meant a great deal to us, bringing us enormous joy, and to this day I still feel the pain of their loss.

Because this page was written contemporaneously, it reads in the present tense. I’ve chosen not to change that, feeling that it’s better to preserve how I felt about them at the time than to change it to reflect how I feel about them today. 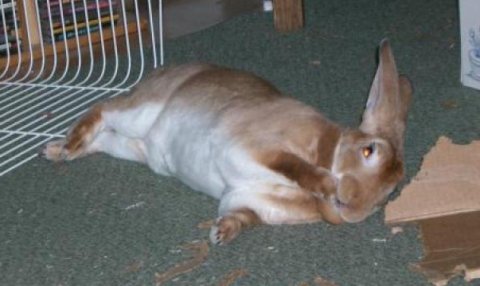 Our first bunny. A beautiful orange Rex, she’s a (not so) little bunny whore who loves attention and being petted… basically she’s the polar opposite of Herbie. She’s basically the queen of the house (aside from me, of course!). She also happens to have a nasty chewing fetish, which has included:

Unfortunately, she’s also had her share of health problems, from issues with her front paws to a recent bout with Abscesses. But, we love her anyway, as much trouble as she is. 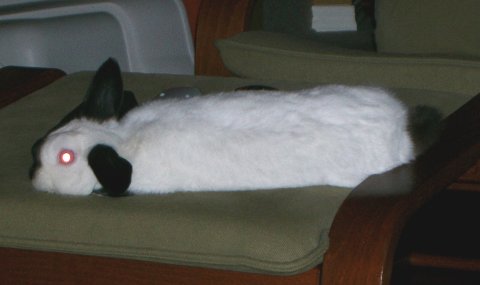 Herbie is our second rabbit. We’re not exactly sure what breed he is… he looks a lot like a Californian (which is, itself, a cross between a Chinchilla and a Himalayan), but he’s far too small, which makes me think he’s a Californian crossed with a dwarf of some kind. He’s frickin’ cute though, whatever he is.

Unfortunately, the Chinchilla in him makes him pretty timid, so he’ll tolerate some petting, but is generally fairly standoff-ish.

Update: Turns out he’s probably a Netherland Dwarf with Siberian colouring. Of course, this means he has no excuse for being timid, but on the bright side, he’s become far more social in recent years. We still need to force him to come out of his cage (he’s just so very comfortable in there…), but once out, he loves to dance around or be petted. He also loves to explore new places, his favorites being our bedroom and our den.