Book two of a two part pentology, Words of Radiance follows directly from The Way of Kings, in plot, structure, and pacing, but provides a satisfying climax for the first major act of this epic series. 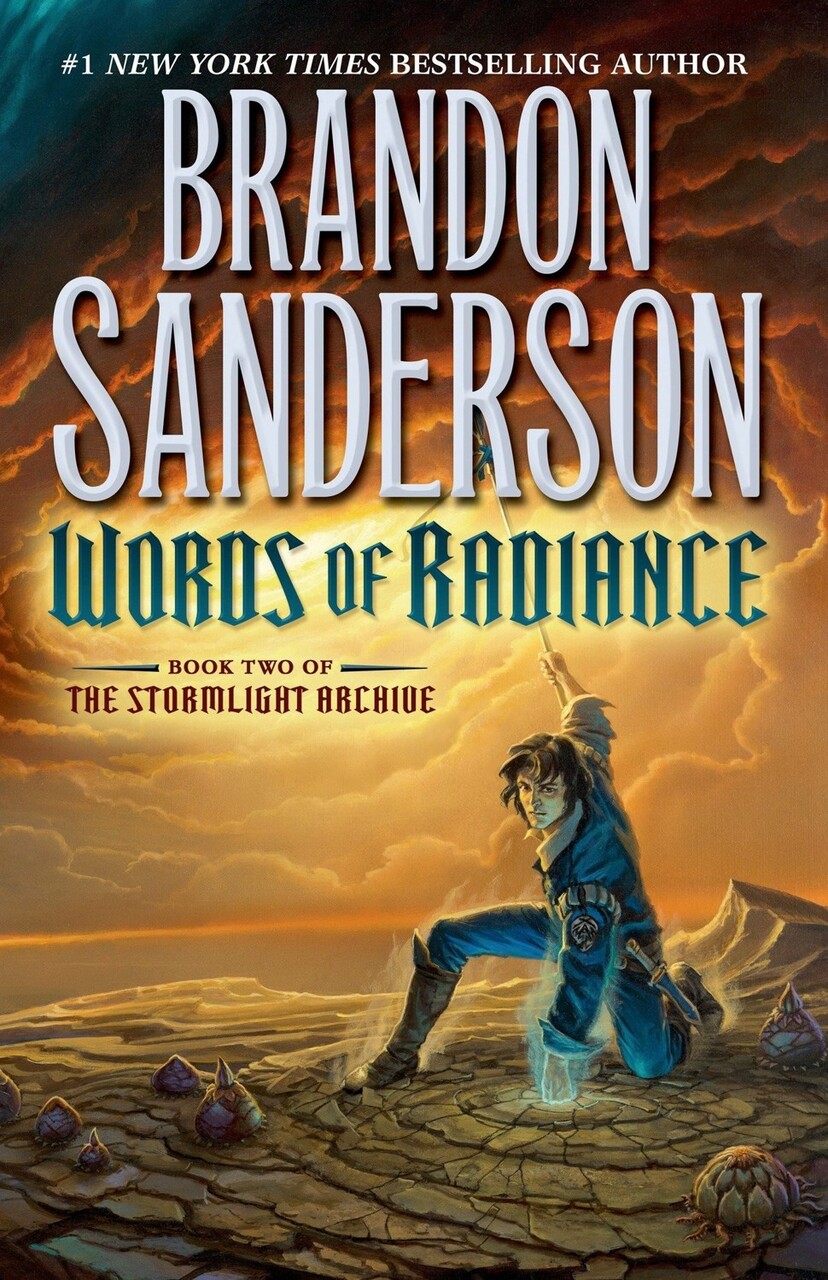 Expected by his enemies to die the miserable death of a military slave, Kaladin survived to be given command of the royal bodyguards, a controversial first for a low-status "darkeyes." Now he must protect the king and Dalinar from every common peril as well as the distinctly uncommon threat of the Assassin, all while secretly struggling to master remarkable new powers that are somehow linked to his honorspren, Syl.

The Assassin, Szeth, is active again, murdering rulers all over the world of Roshar, using his baffling powers to thwart every bodyguard and elude all pursuers. Among his prime targets is Highprince Dalinar, widely considered the power behind the Alethi throne. His leading role in the war would seem reason enough, but the Assassin's master has much deeper motives.

Brilliant but troubled Shallan strives along a parallel path. Despite being broken in ways she refuses to acknowledge, she bears a terrible burden: to somehow prevent the return of the legendary Voidbringers and the civilization-ending Desolation that will follow. The secrets she needs can be found at the Shattered Plains, but just arriving there proves more difficult than she could have imagined.

Meanwhile, at the heart of the Shattered Plains, the Parshendi are making an epochal decision. Hard pressed by years of Alethi attacks, their numbers ever shrinking, they are convinced by their war leader, Eshonai, to risk everything on a desperate gamble with the very supernatural forces they once fled. The possible consequences for Parshendi and humans alike, indeed, for Roshar itself, are as dangerous as they are incalculable.

This review is coming many days after I finished this book, and having already started Oathbringer, I have to admit the plot is already blurring in my mind. But, I’ll do my best!

And, of course, it’s already been nearly a week since I started this review, so the book is blurring even more in my mind… oh well.

Alright, so, where to begin. First off, I’ve obviously given this book a pretty high rating, and I have to admit, this is very much because the ultimate payoff for this book definitely feels worth the investment. The first book closes out as very much the end to a beginning, and this second book feels like the end to a first act. That sense of closure, combined with the gradual reveal of more and more lore in the world of Roshar, really paid off for me.

Where I think this book, and really this series, falls down is in the relative flatness of the characters. I suspect, whether it’s Shallan or Jashan or Kaladin or Dalinar, you could pick two or three adjectives–and probably not very flattering ones at that–that would largely encompass the nature of their characters. Now, to Sanderson’s credit, he attempts to build some amount of backstory to help at least justify these character traits (though the backstories do feel a bit hamfisted at times). Unfortunately, I still don’t feel like these characters are much more than cardboard cutouts.

That said, I’ll be the first to admit this is a pretty common issue in the genre in general (and the same is true of a lot of science fiction). I’d just hoped for better. Maybe I’ve been reading too much Terry Pratchett lately.

But, often in the genre, you have to step back and focus on the world building and the overall plot arch, and there Mr. Sanderson definitely delivers. Mr. Sanderson is known for valuing logical consistency and completeness when world building, and it really shows in this book. Though I will say I still feel like he tends to shove the lore in the reader’s face1 in a way that’s often distracting; Roshar is clearly supposed to be a very alien place with an ecology that’s been shaped by highstorms, but at some point, Mr. Sanderson, you can stop beating us over the head with it.

In terms of the overall pacing, again, the book was a slow burn, but with enough periodic payoffs and gradual reveals that it didn’t feel like a slog. Could it have been a bit tighter? Probably. But I’m fine with a longer, more sedate read. I don’t always need my books to be a sprint to the finish.

Alright… so… yeah. I don’t think I have much more worth saying. Long, slower read. Flat characters. Deep, expansive world building and a compelling story arch. I think I just described the epic fantasy genre. So far, The Stormlight Archive is delivering what’s on the tin!