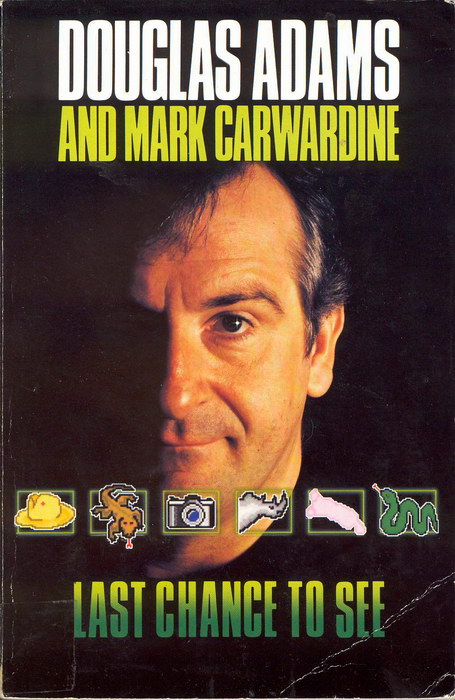 Join them as they encounter the animal kingdom in its stunning beauty, astonishing variety, and imminent peril: the giant Komodo dragon of Indonesia, the helpless but loveable Kakapo of New Zealand, the blind river dolphins of China, the white rhinos of Zaire, the rare birds of Mauritius island in the Indian Ocean. Hilarious and poignant—as only Douglas Adams can be—Last Chance to See is an entertaining and arresting odyssey through the Earth’s magnificent wildlife galaxy.

Douglas Adams is, of course, most famous for his work on the Hitchhiker’s Guide to the Galaxy books, but if there was one piece not related to HHGTTG by DNA that I wish people would read, it would be this one.

Mr. Adams was deeply fascinated with the natural world, and this love for the world around him absolutely shines through in this book, wherein Mr. Adams records his experiences traveling the world, encountering various endangered species in their natural habitat. His wonderful observational skills, and more importantly, incredible talent for putting those observations on paper in his wry, witty way, allow him to truly draw the reader into his experiences, and to feel his awe and reverence for the things he, well, had a rare chance to see.

At once sad and hopeful, I think some of his best writing is done in this volume.

Mr. Adams has said he was most proud of this book. If you ask me, he was right to be.

On the one hand, the Kakapo has seen genuine success, with the Kakapo Recovery programme demonstrating the power of intense intervention to save endangered species. On the other hand, the Northern white rhinoceros is now completely extinct, having disappeared in the wild and died off in captivity.

I will forever be sad that Douglas Adams died as young as he did. However, I can’t help but wonder how he’d feel if he saw how little progress we’ve collectively made in honouring and protecting the world in which we live.