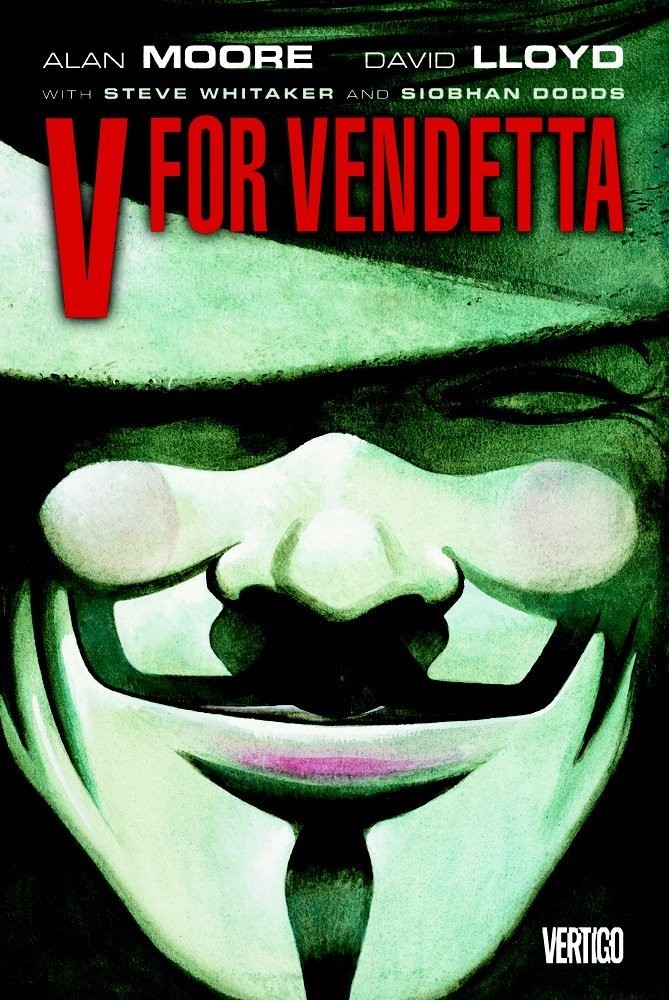 Set in a futurist totalitarian England, a country without freedom or faith, a mysterious man in a white porcelain mask strikes back against the oppressive overlords on behalf of the voiceless. Armed with only knives and his wits, V, as he’s called, aims to bring about change in this horrific new world. His only ally? A young woman named Evey Hammond. And she is in for much more than she ever bargained for…

A visionary graphic novel that defines sophisticated storytelling, this powerful tale detailing the loss and fight for individuality has become a cultural touchstone and an enduring allegory for current events. Master storytellers Alan Moore and David Lloyd are at the top of their craft in this terrifying portrait of totalitarianism and resistance.

This paperback edition collects the classic graphic novel, which served as inspiration for the hit 2008 film from Warner Bros.

You can probably guess what this entry is about. Yes, it’s another book review, of a sort. This time, it’s about Alan Moore and David Lloyd’s dystopic graphic novel “V for Vendetta” (Now A Major Motion Picture! (tm)). This whole graphic novel kick I’ve been on was really inspired by the movie adaptation of this book (which is an excellent film, by the way), and so it stands to reason that I would tackle it at some point. My conclusion? It’s good. But I think “Watchmen” is better.

The book itself is set in a near-future Britain following world wide nuclear war, in which a fascist government has taken power, and now controls the populace through a combination of propaganda, surveillance, and force. The plot sets this government against the main character, “V”, who identifies himself as a force of anarchy, and who’s goal is to tear down the existing system such that the people can be left free to build up a new one.

Additionally, we are introduced to Evey, who begins the book as a desperate young woman on the virge of resorting to prostitution to survive (interestingly, this is very different from movie, in which Evey is portrayed as a relatively self-sufficient, gainfully employed woman), and who, under the tutelage of “V”, ultimately transforms into a revolutionary, thus acting as a metaphor for the people.

Visually, the novel is quite a departure from the last two books I’ve read, employing an almost water coloured style, rather than crisp ink lines. The result is rather striking, and I think fits will with the dystopian setting being portrayed.

So, why don’t I think it’s as good as “Watchmen”? Honestly… I’m not too sure. Upon reflection, I think it may be in part due to the characterization. “V” himself is quite interesting, portrayed more as an idea than an individual, however the remaining characters are somehow flat and difficult to sympathize with. Additionally, the plot seemed somewhat less focused than that of “Watchmen”. Of course, with that said, it’s still an excellent novel, and worth the read.

And now the inevitable question: what’s next? Well, I decided I needed a break. After reading “Watchmen”, “Maus”, and “V” back-to-back, none of which I would describe as “light reading”, I figured it was about time for some pure entertainment! So I’m finally going to read “The Princess Bride”.